We’re heartbroken to tell you this

THIS STORY IS OUTDATED. IT’S HERE FOR HISTORICAL CONTEXT. DOGS ARE WELCOME.

If you bring your dog with you to RockPit or enjoy petting the pups that come in, I have some bad news.

From the start, they were less than cordial. My daughter, who is super sweet and non-confrontational, immediately picked up on some “we hate everything, including this place” vibes from the couple.

She tried her best to be kind to them, but they weren’t having any of it. A smile never adorned their faces.

There were several dogs in the brewery as usual. Sean just adopted a little dog that his wife and kids were playing with at the table behind the unhappy couple.

At some point during their agonizing 32-minute visit, one of Sean’s kids passed the 2-pound dog across the table to Sean’s wife.

This set them off.

They immediately pulled out their phones and started snapping pictures of Sean’s wife holding the dog in her arms.

As if that wasn’t creepy enough the first few times, they kept at it for several minutes. I suppose they couldn’t get enough of the cute dog.

That, or they’re just total creepers. I’m leaning towards the latter.

Upon receiving their check, they asked to speak to the manager. 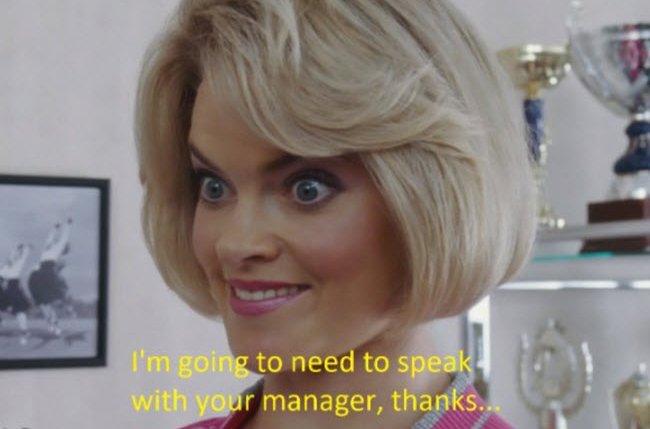 It just so happens that it was Sean that evening. The pup’s dad they were creeping on.

They proceeded to tell Sean that having dogs at an establishment was illegal. Further, they said they were locals, and they would never return because we allowed dogs at the brewery.

They also said they’d be reporting us to the health department.

Sean simply replied, “Thank you for coming in. Have a good evening.”

After the miserable couple scurried out of the door, the people around them asked Sean, “What the hell was wrong with those people?” and told him, “You handled that WAY better than I would have.”

When Sean told me about the situation, I immediately went to look at Yelp and Google for the bad review. I was expecting the 1-star review to hit both sites quickly.

But the review never came.

The health inspector said, “I have to tell you, it’s up to you how you handle it.”

To which Sean replied, “That’s why we have attorneys.”

As far as the health department is concerned, dogs aren’t allowed ANYWHERE on the property of a brewery. This includes the outside porches.

I know other brewery owners and managers read this email. So be prepared for a visit soon. Especially if the creepers visit your brewery.

To be TOTALLY fair to the health inspector, they were VERY cordial and said they were just doing their job.

And I 100% agree with that. They have a boss to answer to and the health inspector stuck around for a while to chat with us.

So I DO NOT BLAME them at all.

I do blame the miserable couple who had nothing better to do with their time than file complaints about something that nearly every single brewery in Orlando supports. 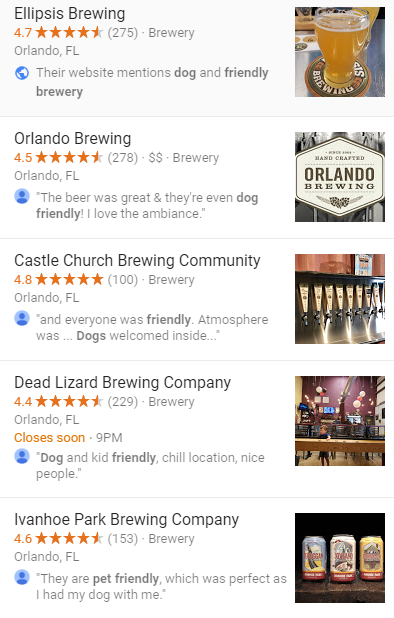 Even if it isn’t technically “allowed”, it’s one of those things that aren’t typically enforced.

Like going 5 miles over the speed limit. Technically illegal, yet usually never enforced.

So we’re going to rekindle the fight on this.

More specifically, Sean is leading this fight. Beyond getting our brewery doors opened, I’ve never seen him more obsessed with anything more than defeating this and allowing dogs at our brewery again.

Dog and breweries go together like hops and IPAs and we intend on fighting this legally.

That doesn’t mean we are going to go at it alone. In fact, several other breweries have been leading an effort to get this changed for a few years now.

In even sadder news, our government “leaders” here in Florida had a chance to change this law and it died in the Florida senate.

So much for the representation of the small business. Especially when each of the senators on that committee has many small craft breweries in their districts.

In the meantime, the pups have to stay home until we get this resolved.

We are absolutely heartbroken over telling you this. Especially when you consider our first paying customer EVER at RockPit had his dog with him.

Ben and Apollo enjoying the first paid beer at RockPit

We intend on getting this resolved quickly. There are several avenues we can take and we’re going to pursue each one until we find that one that works best for you.

Expect an update soon on this as we fight through this over the next few weeks.

The good news is whatever we do to ultimately win this fight, we can pass that knowledge on to other breweries so they can follow in our footsteps until our government leaders get off their asses and get the law changed.

I suppose it’s up to us to “help” them get it changed.

We’ll be happy to do so.

11 year old's can paint building a brewery concrete is heavy hand crafted brewery I may have been an aerobics instructor it's damn hot out its so damn dirty in here live music Lt. Dan got new legs open jam orlando yoga our tanks can only shoot beer plumbers can lay pipe the money pit is real trivia unique cool room yoga
2019 – A year of a-holes, screwups and good times

Let’s talk about dogs, internet trolls and how I became an idiot
Scroll to top