The trillion-dollar principle we use at RockPit

Do you remember the “Think different” campaign from Apple?

It’s one of the most genius advertising campaigns I’ve ever seen. This campaign was the start of global domination for Apple and propelled them to be the trillion-dollar business they are today.

It also happens to be one of the guiding principles I use to drive decisions and the actions I take at RockPit.

You’ll never catch me saying, “We’re different.” We demonstrate it by doing the things we do.

Here’s a quick story of one way I used that principle to convince someone to give us another shot after they were left less than impressed with RockPit.

That’s what I thought when I got the notification of a two-star review on Yelp.

Although rare, when we get a negative review, it’s typically something we’ve screwed up.

It’s happened once or five times.

This review was different. It wasn’t positive, but it was fair. 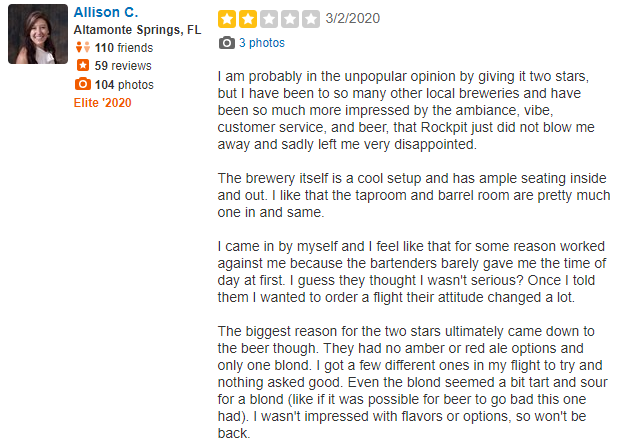 As you can see, Allison wasn’t impressed with RockPit. That’s cool. We’re not her cup of tea.

As weird as it sounds, I’m ok with this. We never meant to be everyone’s cup of tea. We do our thing, and most people like what we do. A few don’t.

I could have responded to the review in a typical way like “We appreciate you for taking the time to write this review as our customer’s feedback is very important to us. We will be sure to share your thoughts with our team in an effort to improve future guest experiences. Thank you.”

(That’s an actual response to one of her reviews, by the way. God. Awful.)

I instead used the “Think different” principle and responded with : 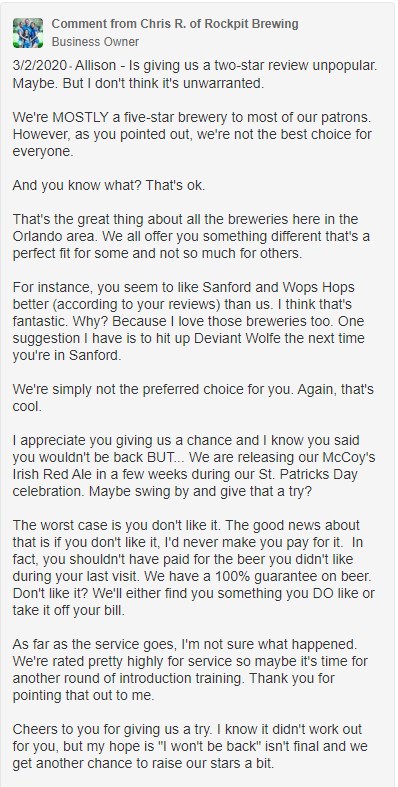 My response to Allison

I meant every word of the response. I do love those other breweries. I do think all the breweries here in Orlando offer you something totally different and is a perfect fit for someone. I do hope Allison comes back and gives us another shot. I am pissed she felt ignored.

When I sent the response, I never expected anything out of it. But Allison almost immediately sent me a message saying: 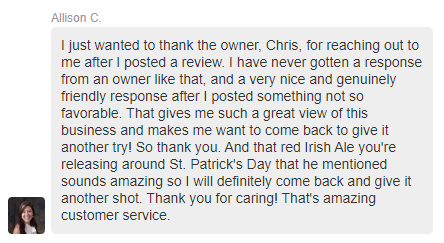 Would she have replied like that if I had sent the “We appreciate your feedback…” response. Hell no.

This is just a small example of the “Think different” principle working. Apple used it to completely change the trajectory of their company.

But it’s also why we do crazy things at RockPit, starting with building a coal-mining themed brewery in Orlando.

It’s why we chose to build everything by hand in our brewery. We never wanted anyone to say “Oh yeah, these are the same tables I saw at xyz brewery.”

It’s why we push out new, unique beers every week, so you have something “different” to try all the time.

It’s why I send these insights into RockPit every week instead of sending “Here’s what’s happening at RockPit” emails like everyone else sends. You’re signed up for our email list, aren’t you?

For better or worse, we do things a bit differently here at RockPit.

I suppose it’s working out for us, too. We’re not a trillion-dollar company (yet), but y’all sure are keeping us busy. To which, we all at RockPit thank you for more than you know.

What about you? Have you ever been in a situation where you used the “Think different” principle and the results amazed you?

Let me know about it by shooting me an email (my email address is below). I’d love to read and chat about it with you some more.

11 year old's can paint building a brewery concrete is heavy hand crafted brewery I may have been an aerobics instructor it's damn hot out its so damn dirty in here live music Lt. Dan got new legs open jam orlando yoga our tanks can only shoot beer plumbers can lay pipe the money pit is real trivia unique cool room yoga
The Secret To Finding Yourself a Good Beer

Our efforts to help keep you healthy while enjoying yourself at RockPit (and...
Scroll to top