I hope you fail…

Lloyd: “Well, it’s not gonna do us any good to sit here whinin’ about it. We’re in a hole. We’re just gonna have to dig ourselves out.”

A few hours later, Lloyd totally redeemed himself by turning his failure into an opportunity. He traded in his gas-guzzling 1985 Sheep Dog for a hog that got 70 miles to the gallon.

And on to Aspen they went to deliver Mary “Samsonite” her briefcase.

Of course, there are more “business appropriate” failure-to-success stories likeSteve Jobs turning around Apple, Thomas Edison failing 10,000 times making the light bulb or Colonel Sanders being turned down 1009 times before someone taking a chance on his chicken recipe (KFC).

But those are talked about incessantly and I figured I’d throw a curveball at you.

Why am I even talking about failure in the first place?

I got the idea the other day when Jeremy sent me pics and said “Well, this just happened” 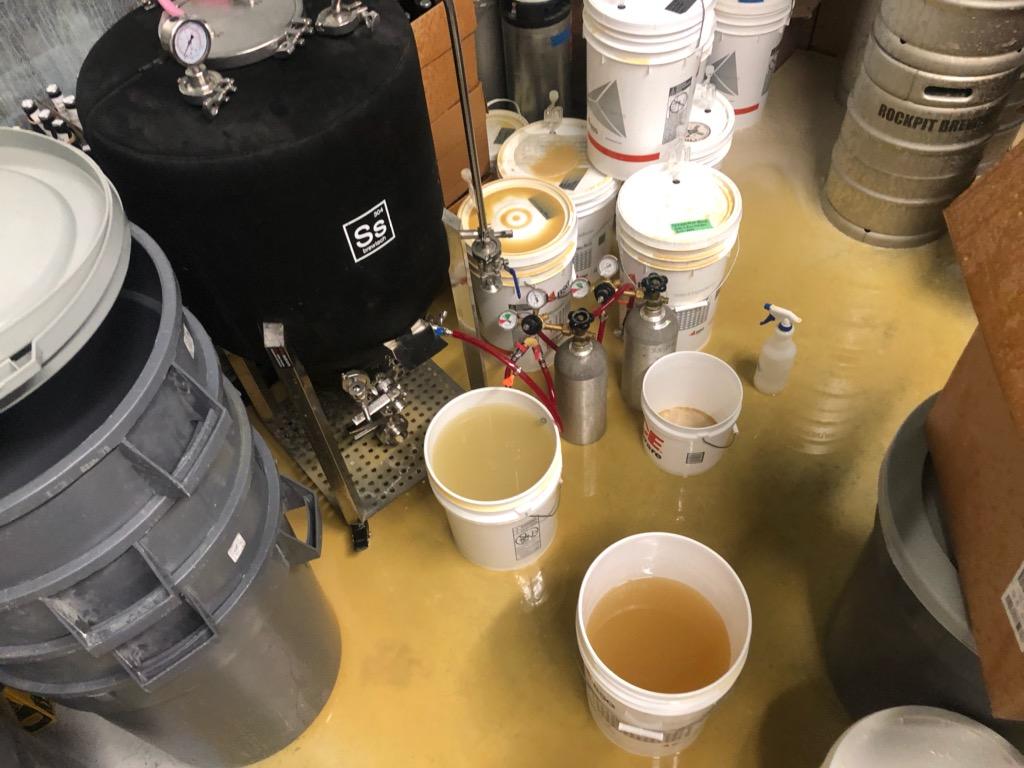 That, my friends, is one of our batches all over the floor. The carb port came loose and the pressurized beer went flying all over the place.

Instead of being mad about it, we said “Well, at least we know what not to do next time”

Another more recent mishap was with Seeds & Desist. You may have noticed it’s not on tap yet. We brewed it several weeks ago and it should have been ready by now.

We, unfortunately, got a different type of watermelon from our supplier. Now we’re left with a nice Watermelon Tomato Flavored Gose.

No worries though. We might be making bloody mary’s with them. Maybe…

But these were mishaps that we’ll learn from. Even though we’ve had plenty of those, we’re going to focus on failures we’ve had at RockPit and what we learned from them.

You’ll find out why below, but most people are afraid of failure. It paralyzes them. They go into “analysis paralysis” which is where you try to prevent a failure of something by analyzing everything for perfect starting your risky venture.

It’s even why some breweries are stuck making the same beer without any adventurous undertakings.

Heck, we take huge risks with new beers all the time. Sometimes we dump them. It cost us money to do so, but we’re trying to make some of the best beer in Orlando. If we sit around and play it safe all the time, we’re never going to make new beer you’ll fall in love with.

And what fun would that be?

My hope is that you see us failing and learning from those failures and decide that it’s time to do some failing of your own.

Because nothing great happens without some failure.

Cackler IPA loses all of it hop character

The first time we brewed Cackler IPA on our big brew system it took us 3 hours to transfer it to the fermenter. The normal time to transfer a beer is around 45 minutes to an hour. To say it was frustrating was an understatement.

The reason it took so long is the trub (grain, hops, etc) was so thick it kept clogging the transfer line.

The next time we brewed Cackler, we used a bag to contain the hops. Thinking it would keep all the trub contained in the hop bag (a common homebrewing technique), we were successful in transferring the beer in under an hour.

We were also successful in removing most of the hop character from the beer.

So, we had a malty, slightly hoppy “IPA” that had less hop character than our pale ale.

We never bagged our hops again.

We tried something new and it failed. No big deal. We did, however, figure out a better way to transfer our beer without it taking 3 hours.

Flights, not enough staff, and a frustrated customer leads to a 1-star review

After 5 months of saying “We’re going to start offering flights this week” and never doing it, I decided it was time to just bite the bullet and do it on a random Saturday. No plan. No backup. Just jumping in and doing it.

I saw a few reviews saying “Why don’t they offer flights” and was sick of seeing it. We kept holding off because of some excuse. Not the right glasses, the staff isn’t trained, we don’t have flight sheets, etc.

It doesn’t seem like it, but it was a risk to offer flights. Especially on busy nights. Flights take roughly 2-4 times longer to pour. That means making customers wait a lot longer.

Something we hate doing. You know, cause we love y’all and want to make you happy. No one likes waiting around for a beer. With flights, it’s VERY easy to double or triple your wait time.

About a month ago (believe it was the second week we were offering flights), we saw this come to a head.

We were two people short on a Saturday night and it got busy. Tons of flight + lots of customers = all of us being flustered, including customers.

We were in a massive rush most of the night and I kept screwing up adding the flights to the patron’s bills. Fortunately, I usually caught it right away and fixed it.

Unfortunately, the one time I screwed up and didn’t catch it, the customer did and tried to have us fix it.

We handled it poorly and the customer got impatient with how long it took us to resolve the issue.

They said the felt disrespected by the way the staff member attempted to handle the issue with their bill. Frustrated, they left and went to Yelp to complain.

I saw the review and immediately knew it was my fault.

I placed the order for this gentleman. Instead of charging him for a 5 oz flight pour, I charged him for a 9 oz pour. A VERY easy thing to do within our POS system.

I was able to smooth it over with him after I explained it was my fault and told him he made us a better brewery with that review (which he did). He upgraded the 1-star review to a 4-star within 24 hours (yay!)

The thing we learned from that was it’s incredibly easy for us to screw up a flight charge. So, we changed the way we add flights to bills and the problem hasn’t come back again.

We also learned to not be short-staffed. Duh!

We took a risk in implementing a new offering. We fought through it. We failed. We learned. We got better as a brewery.

Now flights are second nature and we sell an awful lot of them.

This is our biggest risk right now. Who in their right mind builds a mining town centric brewery in the middle of Orlando? A tourist destination where people are coming to soak up the sun and battle through 3 hour waits to ride 2-minute rides.

Only a few crazy people, right?

Thing is, we didn’t build this brewery for tourists. We built it for you. The locals. You needed a place to escape for a little while. To hang with other locals in an atmosphere not easily found around here.

Luckily, for us, y’all have been showing up in droves. We honestly can’t thank you enough for all the support.

But we’re not out of the woods yet. We could easily fail as a brewery. It’s happened recently to a few popular breweries around here.

That’s why we keep risking failure for you. To keep you coming back. To keep you excited. To keep you reading these emails in anticipation of our next beer release or event.

And ultimately, to get you to come back to RockPit over and over again because you couldn’t imagine missing our latest attempt at failure.

So what are you going to risk failing at this week? My hope is that you fail at something and it’s an awesome learning opportunity. Even better, you succeed.

Remember, greatness it on the other side of failure. And with that, I hope you fail.

This is the reason I’m discussing failure this week.

I have a crazy idea. Would you be interested in meeting once or twice a month to discuss failure?

I know it sounds weird, but it would be where we get together and discuss what risks we’ve taken to better ourselves or our businesses.

And if the risk failed, we’d be there for each other to figure out a solution. If it succeeded, we’ll toast to it!

It would be like a mastermind group for like-minded people who don’t mind taking risks and learning from them.

If so, reply to this email and we’ll figure out when we can all meet up.

“I hope I can make it across the border. I hope to see my friend and shake his hand. I hope the pacific is as blue as it’s been in my dreams. I hope…”

You may have noticed I used the word “hope” a lot in this email. That’s in reference to the most perfect ending to a movie, ever. The end of The Shawshank Redemption.

I’m not sure about you, but I’ve watched The Shawshank Redemption upwards of 50 times. So when I asked Jeremy what the name of this weeks beer release was, he simply replied “Name’s Red”

I knew exactly what he was referring to. The scene where Andy and Red meet in the movie.

We couldn’t think of a more perfect name for this week’s release: “Name’s Red”, an Irish Red IPA.

A simple name for a complex, malty & hoppy beer. You’ll see me sipping on it this Saturday. One of my favorite beers we’ve brewed so far and I’m not partial to IPA’s.

On tap this Saturday 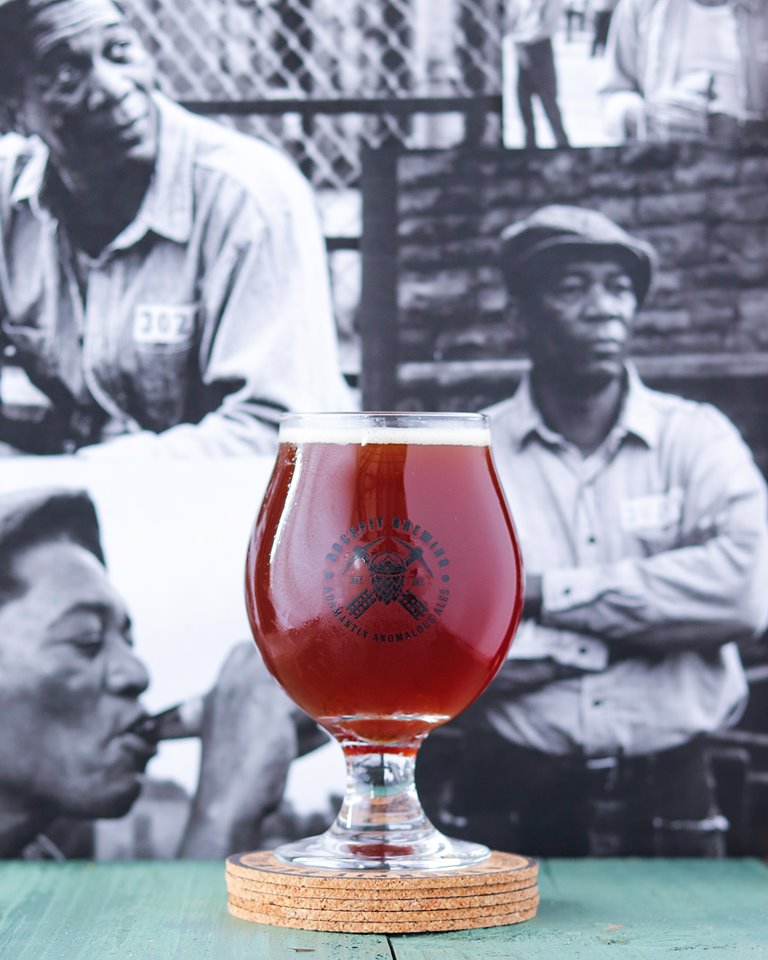 Hey there, I'm Chris Rock. I'm one of the co-founder's of RockPit Brewing, RockPit's marketing dude and a long-winded writer (see above). And if you like my writing, sign up for my emails below. Or don't and miss out on all the good stuff we send out.

11 year old's can paint building a brewery concrete is heavy hand crafted brewery I may have been an aerobics instructor it's damn hot out its so damn dirty in here live music Lt. Dan got new legs open jam orlando yoga our tanks can only shoot beer plumbers can lay pipe the money pit is real trivia unique cool room yoga
File this under the “How cool is that?” category