I can’t believe this happened at RockPit

We had tears in our eyes. We couldn’t believe what we just witnessed. Something happened at RockPit I’d never imagined would happen in a million years.

You see… on Sunday night, about 40 guests showed up for Kelly’s birthday party. On top of that, the brewery had 40 or so guests in it at the time.

I tell you this because most of the 80+ people there had no clue what was about to happen.

The party guests just thought they were there for a birthday

It was Kelly’s 50th birthday party, after all. That’s when one of their friends (who later officiated the wedding), grabbed the microphone to give a toast to Kelly.

Keep in mind EVERYONE at the brewery could hear his toast.

Everyone chuckled at the jokes.

Because next, he said “If you don’t have a drink yet, you might want to get one… This toast is about to get good.”

That’s when Kelly ran off upstairs to our office. The guests were all confused as to why she ran away in the middle of his speech.

He continued to distract them by giving some backstory of how Dan and Kelly met and got to know each other before dating.

Things got serious for them when they arranged for a group of friends to go to a Bret Michaels concert and no one else showed except Dan and Kelly.

Which turned out to be the best thing that could have happened. They struck up a deep conversation and started dating a little while later.

But they hid their relationship from their kids for a year

Dan and Kelly have seven kids between the two of them. Before introducing each other to their kids, they wanted to ensure the relationship was stable.

Seven years later and here we are. He told the guests that Dan and Kelly wanted to get married but didn’t know how and when. Mostly they wanted to ensure all the kids would be present.

And on Sunday night, they were all present. That’s when he announced…

All the party guests and the patrons at the brewery erupted in cheers.

The look of surprise and happiness on the guests’ faces at the brewery were an awesome sight to see. Everyone turned their heads to watch Kelly descend the stairs in her wedding gown and walk to the back of the brewery. 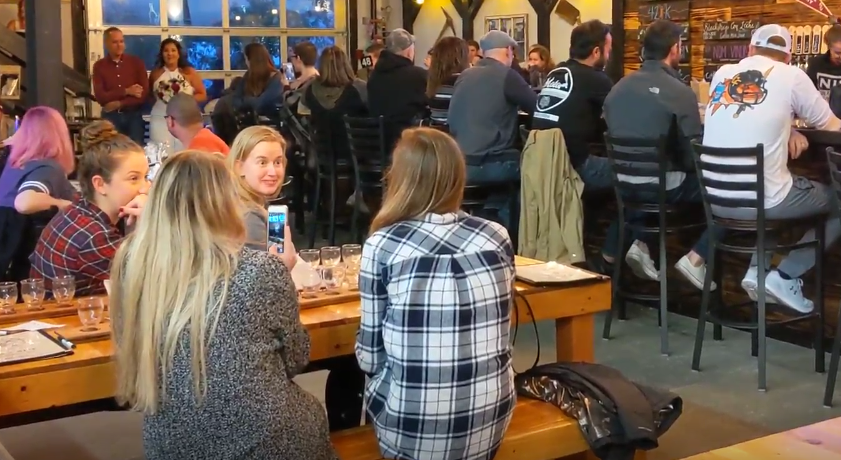 The ceremony lasted about four minutes and RockPit history was made: We had a wedding at our brewery.

Nine months into this RockPit adventure, Dan and Kelly are now forever linked to us. I’m still a little shellshocked that we had this happen.

This is the stuff that happens at big breweries with large outdoor spaces and venue halls. Not at little ol’ RockPit.

Why did they choose RockPit?

I had to know why they chose us for their surprise wedding. After all, weddings don’t happen at neighborhood breweries like ours. Much less, pop-up weddings like this.

Kelly told us they went to several other places and nothing felt right. But when they walked into RockPit, they almost immediately said, “Yes! This is it.”

She went on to explain that nothing else matched the warm & comfortable atmosphere we have here. They felt right at home and felt even more comfortable after discussing the whole idea with Colleen.

Colleen set the whole thing up for them and made sure everything was right. Just like she does for every single event we have here at RockPit.

I mention this because if you have an event / party / function coming up this holiday season, you might want to give us a ring.

I mean… if we’re good enough for a wedding, I think we can handle any event you have in mind.

Let us know. We’ll make sure it’s an event you’ll remember for a long time!

Until next time, Cheers!

11 year old's can paint building a brewery concrete is heavy hand crafted brewery I may have been an aerobics instructor it's damn hot out its so damn dirty in here live music Lt. Dan got new legs open jam orlando yoga our tanks can only shoot beer plumbers can lay pipe the money pit is real trivia unique cool room yoga
How catching spelling mistakes can earn you free beer

How you’re the best salesperson we have at RockPit and why I’m ...
Scroll to top