A few months ago, a couple of guys were sitting at one of our picnic tables with a stack of cash on the table.

I thought “well here’s a few guys I should get to know” and walked over to the table. If I remember correctly, I joked “Tonight’s take was pretty good, eh?”

(a reenactment of their response)

I asked what the stacks of cash was for. They told me they worked in the TV commercial industry. It was petty cash for a commercial shoot.

I said, “That’s the best cover story I’ve ever heard”.

A few chuckles were heard off in the distance as I realized my jokes weren’t landing.

But it turns out, they really do work in the industry doing set design and filming commercials for Disney, Universal and other big-name brands you consistently see on TV.

If you live in Central Florida and watch any TV, you’ve seen one of the commercials that Chris and Justin have been part of creating.

After talking to them for a bit, Chris asked if we ever gave any thought into filming a commercial for the brewery. I said “Yeah, but not too much. Just a few ideas here and there”

That’s when he said he had an idea he wanted to try out and if we’d be willing to be his guinea pigs. We’re always down for being test subjects (still recovering from a few experiments), so we agreed.

They came in a few weeks back and spent a day at the brewery filming & interviewing Jeremy. Some of the videos they showed us that day looked amazing. Of course, like anything creative, you don’t know how it will turn out.

We honestly didn’t know what to expect…

Of course, Jeremy hated it. Not because it’s bad. But because Jeremy doesn’t like seeing himself in the video.

In any case, Chris kept tweaking the video more and more. I think he ended up doing 12 revisions. To say we got our money’s worth is an understatement.

What we ended up with is a peek inside RockPit narrated by Jeremy. He not only gives you a quick overview of how beer is made but some insight into why we designed our logo the way we did.

Also, it just makes RockPit look really damn cool. Don’t get me wrong. I think we look cool as is (I’m a bit biased), but seeing the result of pro level commercial making is beyond our wildest expectations.

So without much further ado, here’s our first professionally created video about RockPit Brewing. 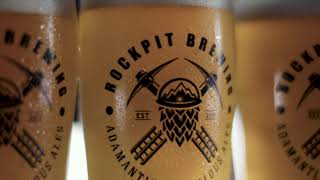 Hey there, I'm Chris Rock. I'm one of the co-founder's of RockPit Brewing, RockPit's marketing dude and a long-winded writer (see above). And if you like my writing, sign up for my emails below. Or don't and miss out on all the good stuff we send out.

11 year old's can paint building a brewery concrete is heavy hand crafted brewery I may have been an aerobics instructor it's damn hot out its so damn dirty in here live music Lt. Dan got new legs open jam orlando yoga our tanks can only shoot beer plumbers can lay pipe the money pit is real trivia unique cool room yoga
Let’s help our island neighbors