File this under the “How cool is that?” category

Almost every week, we have someone come through our doors to teach us a bit of history about the area RockPit is located in.

That guy is pushing 90 and is still a firecracker.

But last Thursday, I learned something that kind of blew my mind about our neck of the woods near RockPit.

“I’ve drunk a lot of beers here. Just nothing like this”, Jeff told me.

Jeff’s brother-in-law Eric and his sister, Jennifer are the owners of Badger Welding. Before Badger got some new digs, our building served as their shop. There were many days where Jeff and Eric used to throw back a few cold ones after a hard day’s work under this roof.

When Eric and Jennifer, walked into our building a few months back, they were stunned. They couldn’t believe we took that old, grimy, and smelly welding shop and turned it into one of the most unique breweries in Orlando.

They went home and told Jeff “You have to go check that place out. It’s unreal”

It took him a few months, but Jeff and his wife, Angela finally made it in. Again, they couldn’t believe how the building looked now.

They were pointing out where stuff used to be and how everything was set up in here. A few minutes into the conversation Angela shared something with me that that was unbelievably cool.

“You know that little building where the eye place is?” she asked me.

“That was my grandmother’s house”

It’s one thing to be told that used to someone’s home. It’s another to be told, “That was my grandmother’s house”.

To meet someone who called that place “home” is really freaking cool. At least to me, it is.

Not that long ago, little Angela used to run ‘round these streets with her family. I can imagine her in the back yard of her grandmother’s house getting dirt under her fingernails. Swinging as high as she could on the swing set. Chasing her dog until one of them gave up.

She went on to tell me that most of Taylor Avenue were family homes of her relatives. Her uncle’s house was where CVS and the Chase Bank is. Another relative’s house was across the street near the Karate place on the corner. And of course, her grandmother’s house was next door.

So, without a doubt, Angela is about as local as you can get to RockPit brewing. She literally grew up next door.

And looking out there now, it’s hard to imagine this all used to be all residential. It’s grown by leaps and bounds around here and it’s only going to keep growing.

This is where I get to thank y’all some more. I just looked a few minutes ago and saw that we crossed the 100 reviews threshold on Google and have maintained a 4.9 rating. 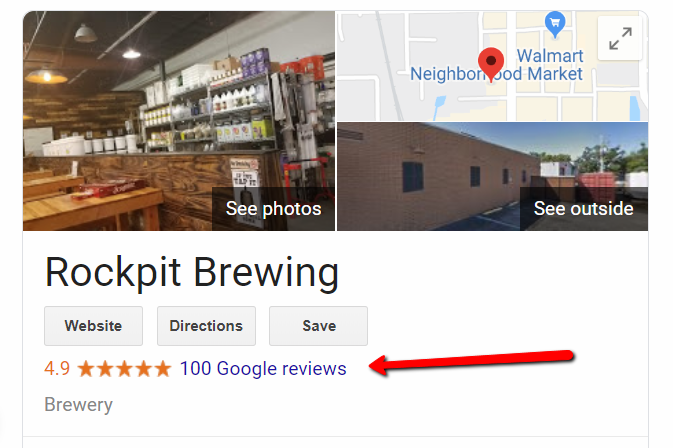 Thank you so much to all of you that have left us reviews. You’ll notice I reply to EVERY SINGLE one of them. I honestly appreciate all feedback, good or not so good. I feel like I owe it to y’all for taking the time to give us your review. It’s the least I can do.

If you have a few minutes, go check out some of the replies. I like to have a little fun with it.

And if you haven’t left us a review yet, it would be mighty fine of you to do so. Expect a thoughful reply from me.

11 year old's can paint building a brewery concrete is heavy hand crafted brewery I may have been an aerobics instructor it's damn hot out its so damn dirty in here live music Lt. Dan got new legs open jam orlando yoga our tanks can only shoot beer plumbers can lay pipe the money pit is real trivia unique cool room yoga
Beer up north is better because of what?

I hope you fail…
Scroll to top