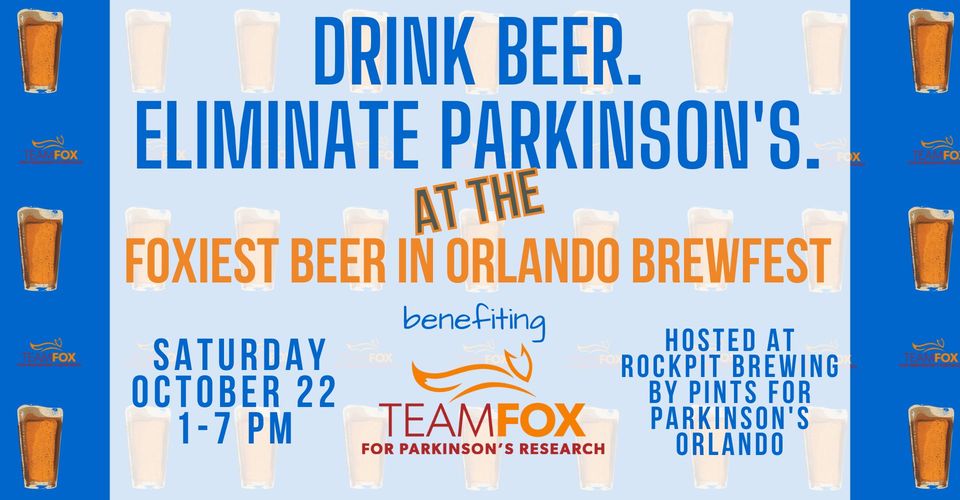 By buying a few beers at The Foxiest Beer In Orlando Brewfest on October 22nd at RockPit Brewing, you can help the Michael J. Fox Foundation and Pints For Parkinson’s Orlando find a cure for Parkinson’s and eliminate it for good.

100% of the proceeds from the donated festival beers and raffles will benefit Team Fox, the grassroots fundraising arm of the Michael J. Fox Foundation.

Over the last 20 years, the Michael J. Fox Foundation has raised over a billion dollars for Parkinson’s research. It is responsible for almost every innovation in the fight to end Parkinson’s.

A large part of their fundraising comes from grassroots organizations like Pints For Parkinson’s Orlando.

Pint’s For Parkinson Orlando has raised a whopping 78k over the last few years for the Michael J. Fox foundation.

But Covid put a dent in their fundraising efforts, and they haven’t been able to fundraise like they could before the pandemic.

Now they’re back, intending to reach 100k raised by the end of the year.

And with your help, they can get there.

All you gotta do is buy a beer or four on October 22nd at RockPit Brewing.

Thank you to all of the breweries who have generously donated kegs to the event including RockPit Brewing, Bowigen’s, Crooked Can, Deadwords, Home State, Hourglass, Ivanhoe Park, Sierra Nevada, Ravenous Pig, Vaulted Oak, Windermere and more.

The Grateful Spread at RockPit
Scroll to top